Before human footprints marked the soil of what would be the American West, native wild horses had already survived three ice ages, millions of plant-eating competitors and prehistoric predators.

How? By their ability to adapt. 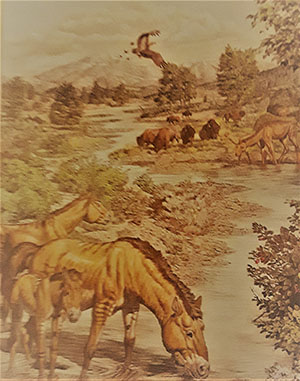 Horses evolved from fox-size to the horses we know today because they adapted to every environment across the Americas. Survival meant horses' soft-toed feet and small eyes turned into hard hooves and the largest eyes of any land mammal. Those eyes, located on the sides of their heads, meant they could eat and spot danger at the same time. The length of their legs and coats adapted to where they lived. Some became short and shaggy. Others lean and long. Their palates appreciated forage spread across their vast homelands from the Arctic to the tip of South America.

America's wild horses and millions of other large animals suffered a die-off at the end of the Third Ice Age. Climate change made food scarce. Weakening horses travelled long distances and battled other herbivores for each mouthful. Some hardy bands of horses headed north to survive the third Ice Age in Asia. Others stayed in North America and died there. As plants vanished, famine claimed the plant-eaters. Without them, meat-eaters starved, too.

Did America's wild horses go extinct? Maybe. Modern science has made us rethink what we "know." Carbon dating and DNA testing of fossils prove the Americas were not empty of horses for millions of years, as we once thought. Horses were gone for – at most – eight thousand years. As research and exploration continue, we may discover remains of horses whose lives bridged the missing years between ancient equines and horses re-introduced by Spanish explorers and colonists in the 1490's.

The stories of the Virginia Range and Calico Mountains mustangs are typical of many wild horse herds across the American West and they stretch back to California's Spanish colonial period.

Whether wild horses had always had a home on the range or were an introduced native species, they were a common sight on mission and rancho lands 1697-1821. Rancheros captured and interbred the horses they called mustangs (drifters) with Spanish horses to bring New World excitement to the practice of jineta – the kind of horsemanship glorified in the legend of Zorro, that emphasized grace, balance and speed.

Trained and ridden by virtually enslaved Native American vaqueros, these valuable horses became a means of escape. Soon, a pipeline of stolen horses ran from Southern California, through Nevada to Oregon.

Vaqueros weren't the only ones to claim their freedom. The stolen horses joined generations of mustangs throughout the West, surviving just as they had in prehistoric times, by adapting to deserts, forests and snowy mountains.

Nevada's Soldier Meadows is at the edge of the Black Rock Desert which is now famous for the Burning Man Festival, but it was once a Civil War remount station. There, horses were trained horses to replace those killed died on bloody battlefields. Descendants of hot blooded officers' mounts and heavy horses schooled to pull cannons can be recognized in the Calico and Granite Range mountains.

The Pony Express, farmers and ranchers recognized the native hardiness and intelligence of mustangs. They were considered a renewable resource of the Western rangelands until America's equestrian society gave way to mechanization.

Although this rugged and romantic heritage gave us the Virginia Range and Calico horses, they were nearly lost by 1950 when men discovered another way to reap the riches of the Nevada range. Pilots of small aircraft spotted wild horses from the air, zoomed down to chase them out of hiding and pursued them for miles. Once the mustangs slowed to stumbling exhaustion, a ground crew took over. They roped and dragged the horses into truck beds. Bewildered and injured, they were hauled to factories where they were processed as dog and chicken food. 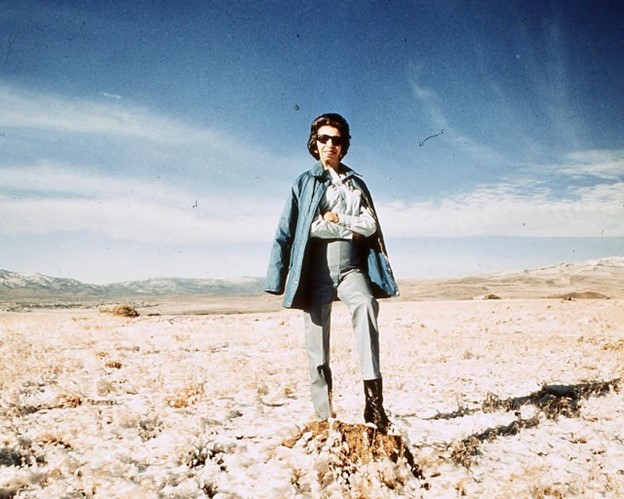 The Virginia Range and Calico mustangs might have vanished if a Nevada rancher named Velma Bronn Johnson hadn't been driving to her day job as a secretary along the road which would become Highway 50. Late for work, she was stuck behind a slow-moving truck and suddenly realized it was packed with bloody mustangs.

Velma fought to end the cruel money-for-meat roundups. First, she tried plain-talking, but the horse hunters laughed at her. She persisted and the mockery turned nasty. She earned the nickname "Wild Horse Annie" not for her advocacy, but for a facial disfigurement caused by childhood polio treatment.

Men -- some locals, but many strangers -- held power over the range and its resources. Government, miners and livestock ranchers supported the "harvest" of wild horses. Velma recognized she was at a disadvantage, saying, "A woman fighting a man's battle in a man's world…has three strikes against her to begin with." So, she turned to children, reminding them and their voting parents that the wild horses and public lands were treasures that belonged not just to men who'd profit from them, but to all Americans. When Velma died in 1977, she'd stood firm and won many battles for wild horses, but new political pressure and legal strategies mean todays wild horse advocates are fighting many of the same battles she "won." 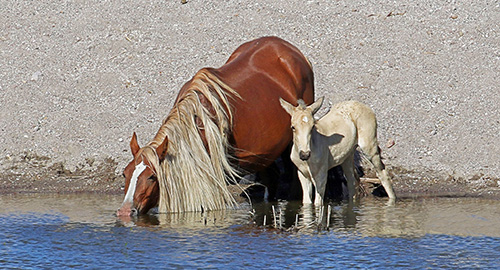 1. There are no natural predators to control the population. 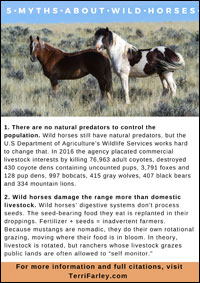 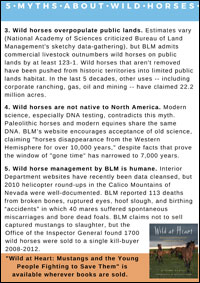 MustangMedia 101 by Terri Farley: Whose Home on the Range?

Terri talks to you while she's watching captive wild horses:


Wild horses can't speak their own stories. Once, that didn't matter, but now wild horses suffer and die at human hands. We take their food, water and homes. Read more. 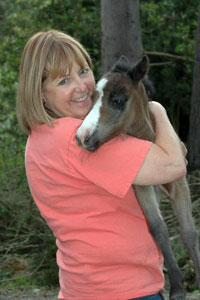 You'll feel comfortable telling people what's happening to wild horses if you know what you're talking about.

Check out these websites for news, statistics and resources. If you are working on a wild horse report, these are good sites to visit.

Websites can't cover every single news story about wild horses, but you can create a Google alert for wild horses. Here's how.

Pay attention to these alerts to see where your voice is needed before the damage is done to your mustangs!

3. Forward this to those who care or need to be educated about wild horses:

Forward this to those who care or need to be educated about wild horses:

ANNOUNCING MustangMedia 101 by Terri Farley: Whose Home on the Range?

Wild horses can't speak their own stories. Once, that didn't matter, but now wild horses suffer and die at human hands. We take their food, water and homes. A few people want wild horses taken off public lands so corporations can earn money from the land's minerals, oil and grazing. But most people love wildlife and wild places. They're learning to stand up for wildlife because the Western public lands belong to all Americans! Our hearts lift at their rough power and beauty.

Knowing mustangs inspires me to tell their stories as well as I can, before they're extinct.

When you see an opportunity to comment about wild horses online or in person, do it! For short Facebook or Twitter comments, use only Step One. For letters to editors, blogs, letters to government representatives, use all 4 steps.

STEP ONE: Make a statement and use BECAUSE to back it up.

"Wild horses deserve freedom because laws have given them the right to roam public lands."

"Wild horses belong to all Americans and, because most American don't believe in eating horsemeat, mustangs shouldn't go to slaughter."

• Describe your personal connection to the issue in 2 - 3 sentences.

• WHAT ACTION do you want people to take? - 1 sentence

That's it! In 3 - 6 sentences, you will have explained why you want to live in a world with wild horses.

You can keep that short document as a letter-in-waiting, but whatever you do -- put your opinion out there!

You don't have to be brave or brilliant; you just have to speak up for those who can't speak for themselves.